We made some good progress last night with smaller people using physics to control larger people.
Last night we were working on Tachi Gatame or standing controls.  Specifically head locks (Kubi Gatame) from linear motion (Irimi) and from opening motion (Hiraki)
Some of our smaller students were having trouble establishing the headlock on taller / bigger opponents.
One of the students is a mechanical engineer so I tried to explain the concept of Linear motion (MxA) generating circular force (F) in mechanical terms
Imagine a old fashioned steam locomotive 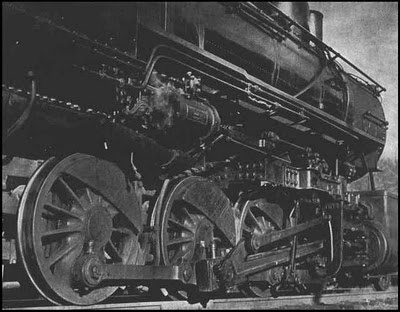 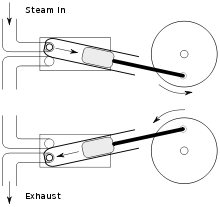 Now Imagine that on a different plane, parallel to the floor.
So for this technique the piston is your linear motion, entering to get off line.  That linear motion drives the wheel that is your arm (A).  So when your foot touches the mat your weight (M) is transferred to your arm.  Your arm (wheel) turns transforming linear motion into circular motion.  That circular motion (MA) becomes a scoop and you deliver that force (F) into your opponent’s neck destroying his balance (Kuzushi).  You continue that circular motion bringing your elbow down and back into your ribs.  Engaging all your large gross motor back muscles and trapping your opponents head on your shoulder.  Achieving the head lock.
Quod erat demonstratum.
The physical principles for opening are like a Matador’s cape 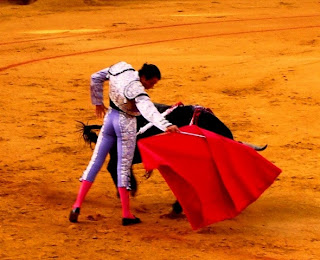 You open to get off line.  That motion pulls the wheel that is your arm (A).  So when your foot touches the mat your weight (M) is transferred to your arm.  Your arm (wheel) turns, that circular motion (MA) becomes a scoop and you deliver that force (F) into your opponent’s neck destroying his balance (Kuzushi).  You continue that circular motion bringing your elbow down and back into your ribs.  Engaging all your large gross motor back muscles and trapping your opponents head in your armpit.  Achieving the head lock.
Quod erat demonstratum.
From the video take what is good ignore the rest.  I chose this video because it is a nice example of using an opening motion to hook the head.  I do not advocate training off of "feeds" instead of attacks.


[Violence happens: by surprise, closer, harder, and faster, then most dojo training]


Nor do I believe it is likely to be able to spin a guy a guy around in a tenkan out side of the Dojo.  However, this is a beautiful example of Hiraki that I can use as a visual aid.
Another motion we worked on last night was Shomen Irimi or direct entry.  Sometimes the only way to get off line is to go right up the middle.  It's not ideal but if you get stuck there you better have a way to get out.
One of those ways is Juji Jime or cross choke. 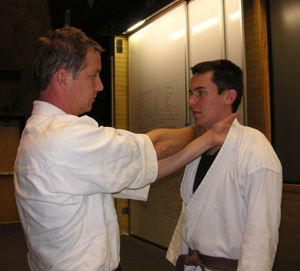 The thing is this choke only works under Judo Gentalmen’s rules.  Namely I won’t hit you if you don’t hit me.  Also I’ll wear a heavy jacket you can use to get a grip on me if you wear one too.
So how do you make this technique work outside the dojo?


I have come to use the term impact drive instead of striking.  The reason why is a drive implies the need to maintain a structure (Cow Catcher  / Plow ) and go through your opponent as opposed to striking and recoiling like a boxer. 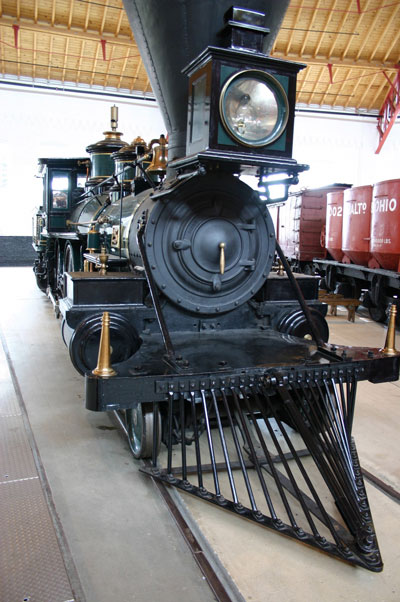 "In a real fight, 70% of Aikido is atemi (striking) and 30% of is throwing." There is a philosophy of striking that it's not simply about learning to punch and kick, but to use any part of the body to affect specific contact points.


Tachi Shime Waza (standing strangle techniques) Juji Jime (cross choke) Keishoukan Budo Style.
For what ever reasons you can enter, and you can't open so you have to go right up the middle.  In order to protect your self (cover the motion) you have to deliver an impact drive

Every move you do needs to
1) Secure your perimeter (keeps you covered)
2) Disrupts his ability to attack you
3) Sets up your next move.

So instead of reaching for your opponent's lapels, when you step through him (linear motion - Irimi ) between his legs you drive your forearms into the sides on his neck (Impact Drive).  Fold your palms over his scapula (shoulder blades).

[Bad guys might not be wearing a Gi, or even a shirt, but all bad guys have shoulder blades]

The bad guy will push back against your driving force or be off balanced both mentally (in the OODA loop) and physically. You can step and pivot in one motion.  So when your foot touches the mat your weight (M) is transferred to your arm (Impact drive).  As he freezes or pushes back, you pivot on that foot (open/ hiraki).  Use the open motion (MA) To deliver force (F) into the choke as you get off line.  Pull you hands push your elbows


Now you are off line - Secure your perimeter (keeps you covered)
He is off balanced and trapped on your line - Disrupts his ability to attack you
Best case he is asleep because blood is no longer getting to his brain. Worst case at least he will be easy to throw if the choke isn't working -  Sets up your next move.

OK, so this blog has been fairly technique and art specific.  What fundamental principles can you learn from this to apply to your own training?

Learning how to generate and deliver force into your opponent is a vital key to any martial art.
Gravity is a constant and unlike Ki, Chi, or the power of the force it doesn't take a leap of faith to use.

This is why you hear stories of tiny little masters tossing huge dudes across the room.  They understood applied physics and could deliver force into their opponent under dynamic conditions.
Train hard, train smart, be safe.....
and may the force (f=ma) be with you 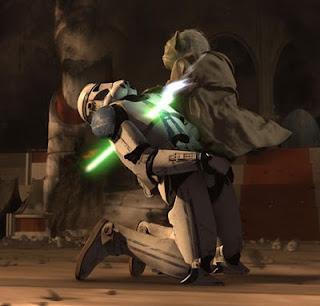 On 4/18/11 (only 2 weeks away holy crap!) I will be presenting Special Operations Control Tactics at the 2011 SOTA conference.

This is a big opportunity for me and I am very excited.  I will be teaching Operators from every SWAT team in the upper midwest
http://www.creatingorder.com/sota2006/2011vendors.html

I have been working on my introduction speach.  I thought I would post it here and test it out on all of you.  Feel free to make any suggestions or corrections in the comments.
Also - Shameless self promotion warning - Any Operators in the upper midwest click the above link and sign up for the training.
Special Operations Control Tactics – Introduction
Me:
Hello, I am Kasey Keckeisen lead instructor of Special Operations Control Tactics
I am a Police Officer in Mounds View.  I am also a team leader and training coordinator for the Ramsey County SWAT team.  I am the United States Midwest Regional Director for an International Taiho Jutsu organization, and the Minnesota State Director for One-On-One Control Tactics. I have been training in martial arts for nearly 20 years.  I have a 5th degree black belt in Ju Jutsu, and 3rd degree black belts in Judo and Aikido.
My exposure to SWAT started in 1999.  I was hired by the police department and helped as a role player for the Ottertail County ERT.  The team commander, Dean Nelson indicated a need for defensive tactics specific to swat.  Around 2000 I did my first SWAT defensive tactics class.
I was hired by Mounds View in 2001 and started to run a Dojo out of a building owned by Greg ‘Sully” Sullivan.  Sully also addressed the need for control tactics specific to the requirements of SWAT teams and asked me to design a training program for his team.
I was in the process of designing that course when I met Terry Soukkala from Ramsey County SWAT.  I told Terry what I was working on.  He asked me why I never tried out for the team.  So I did.
I discovered what a martial artist, even what a patrol officer imagines a SWAT team needs is vastly different than what an experienced Operator knows he needs to achieve the goals of an operation.
I have spent nearly a decade refining testing and field applying the fundamental principles of these control tactics.

SOCT:
On every operation I’ve been on where subjects were present at the location it was necessary to physically control them until a deep clear was conducted and the investigating agency took over the scene.
Those circumstances are greatly different than controlling a subject during regular patrol functions.
Even though it required on nearly every call out, very little training time is spent on how to control subjects on operations.
That is why Special Operations Control tactics was developed.
[Start power point]
The purpose of Special Operations Control Tactics is to provide Tactical Teams with reliable high percentage gross motor skill techniques to control subjects while maintaining Operator safety, weapon retention, and team safety
Upon entry, a team may encounter a subject/s that has no visible weapons but is non responsive to verbal commands.  Operators must control these subjects while one or both hands are occupied with an entry weapon
Non Responsive Subjects:
SPECIAL OPERATIONS CONTROL TACTICS - RULES OF OPERATION:
Simple
Every motion you make in SOCT is based on tactical motions you make on operations
8 Points of Motion
Efficient
Three motions or less
The standard of effective technique - every move you do needs to meet three fundamental standards. These are:
1) It secures your perimeter (keeps you covered)
2) Disrupts his ability to attack you
3) Sets up your next move.

This happens with EVERY move you make, not every technique, but every move within that technique.
-Marc MacYoung
Gross Motor Skill
Gross motor skills are simple, large-muscle group actions like squats, push-ups and push/pull-type movements. Unlike fine and complex motor skills, gross motor skills do not deteriorate under stress, nor do they deteriorate under cold weather conditions - in fact, they may be enhanced by the effects of fear and stress.

Movement Defeats Strength
The success of tactical operations depends on stealth, speed, and violence of action.  After entry is made stealth is gone.  Speed + Violence of action = Movement.
Subjects must be controlled “on the move”.  Subject control can not hinder the movement of the team or the completion of the operation
Practical Application
In order for a technique to be valid it must have four elements:
From there on every thing else is physical hands on training.  Thanks for taking the time to read my speach.  Again, please leave any revisions you feel are necessary in the comments.  I may not listen to you but I appreciate your advice
Posted by Kasey at 8:27 AM No comments: