Does training for practical application require a Dojo?

No, and here is why.  If I use the metaphor of a tree with solid, efficient, practical application combative measures as the end product or the fruit of the tree if you will.  Then traditional martial arts training is the root system of that tree.  The deeper better developed the roots are, the stronger the tree, the better, and more fruit the tree can yield.

Every tree will need a pruning process

Losing an illusion makes you wiser than finding a truth.

If you seek wisdom, seek the destruction of the illusions you hold as true more than you seek new truths.

Cut all that is unnecessary, contradictory and unproductive.  Nurture and refine what is left.

My goal as an Instructor is to get my students to yield quality fruit of their own through a process that is more streamlined / outcome based than the path I took.

However, I don’t want to throw the baby out with the bath water.  There are many great aspects of traditional martial arts training I strive to maintain while streamlining the process.

One of those things that I enjoy is the sense of esprit de core of a Dojo.  There is nothing quit like sweating, and bleeding on each other while you hit, crank joints, and slam folks into the planet to bring people together.  People who go through that  process and stick around for more earn their place at the Dojo and become tight like family

I am very fortunate to have the Dojo family that I have.  Due to the nature of what I teach, and how I teach it (would you believe there are people out there that do not enjoy hard work or sweating, and bleeding on each other while getting hit, getting your joints cranked on ,or getting slammed into the planet?) I will never have a large commercial Dojo.  There just isn’t a market for it.  That is fine by me.  I’ll take my 10 – 20 quality students over the hundreds of the type of students that flocks to belt factories that tend to be commercially successful.

It was those best friend bonds that were forged through mutually survived hardships (mostly self imposed) at the Dojo that made building a new Dojo possible.  There is no way I could have done it alone.

Last Saturday we had a Dojo opening seminar and party.  Great class, and a fun time!  This is how we got there

In April (this will sound hokey) I started feeling the need to find a new place to train.  I felt it so strongly that I was even having dreams about it.  As mentioned it is very unlikely I will ever make enough money teaching what and how I like to teach, to rent a place big enough for me to teach in.  So I started looking into possibilities of using space in places that would be willing to help Law Enforcement and Military receive more (and better) training.

I called the Elk River American Legion and spoke to Gloria.  I told her what I was looking for and trying to accomplish.  She told me they had a meeting room in the basement I could use.  I was very excited and drove over there right after work.  She showed me the meeting room straight out of 1972.  But I figured this could work we can take the tables down, lay down the mats, put the mats away and put the tables back every class.  I’ve done that before, it is not super fun, but no big deal.  Gloria showed me a closet where we could store the mats.  She thought it might be a little cramped and suggested we might store the mats behind this other door.  The other door looked just like the closet door she just showed me so I assumed it was just another closet.  Instead it was this very large open space that had been filled with odds and ends over the years.  I asked if it would be possible if we just moved some of the stuff around to train in this room.  Gloria shot me a look.

I figured great, that was a deal breaker, I just stepped on my dick.  Gloria said, well – we would have to move all of this junk and put up some fresh paint.  It’s just me, the maintenance guy, and my husband doing all that work.  I said I have at least 10 friends with strong backs that could get that work done if you would let us help.  Gloria pitched the idea to her boss and the gears started turning.

Apparently Gloria has been attempting to do something productive with that room for 20 some odd years and it wasn’t until the fates put us together did it happen. 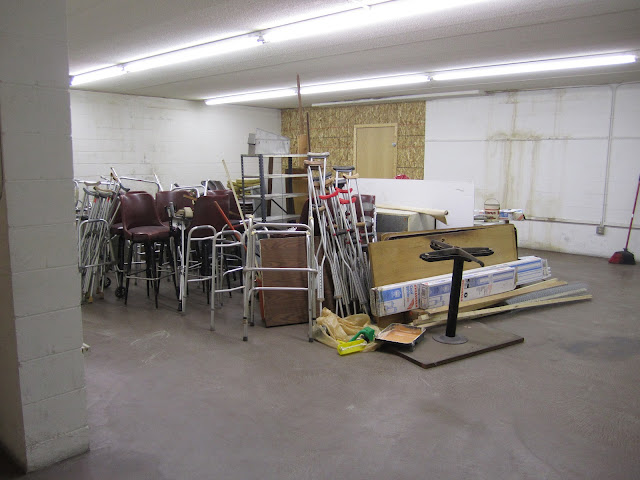 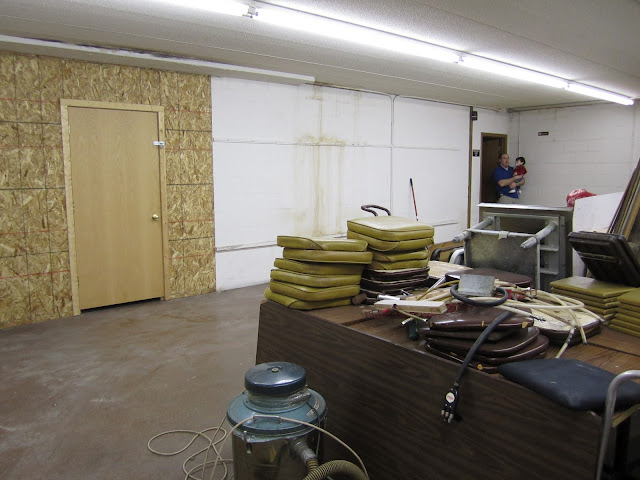 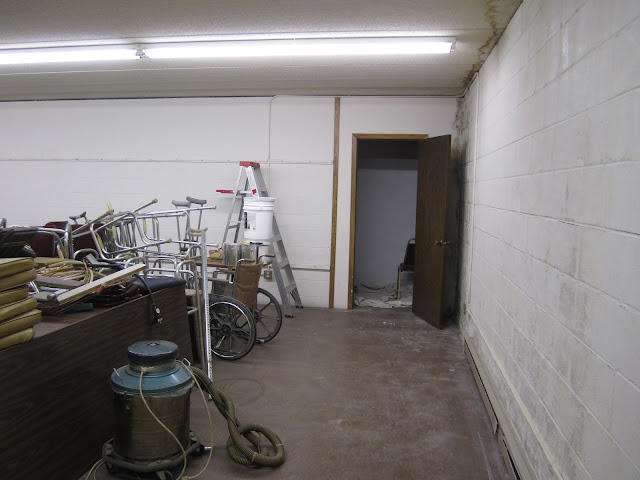 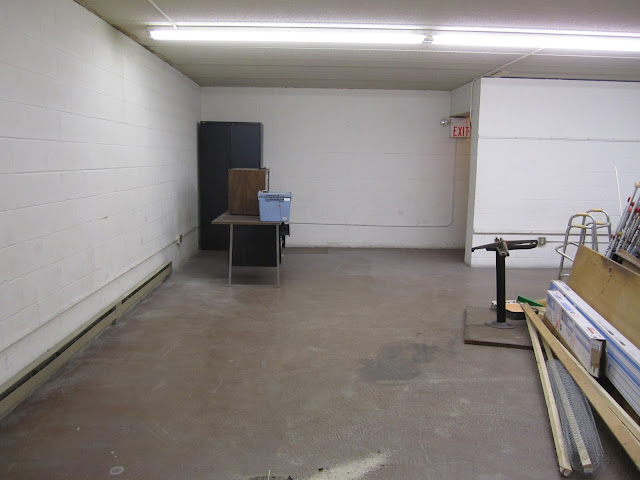 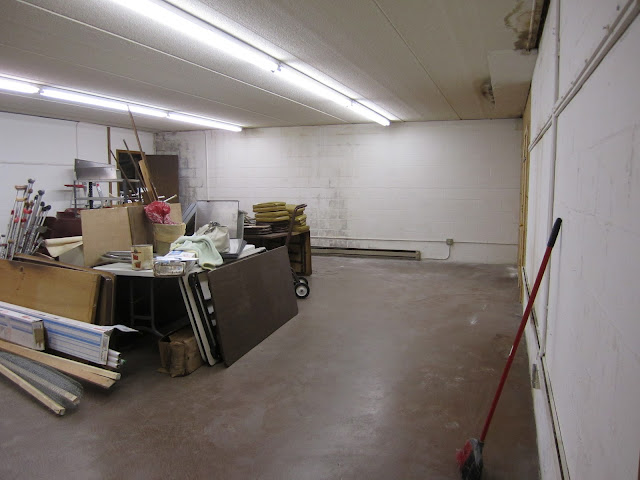 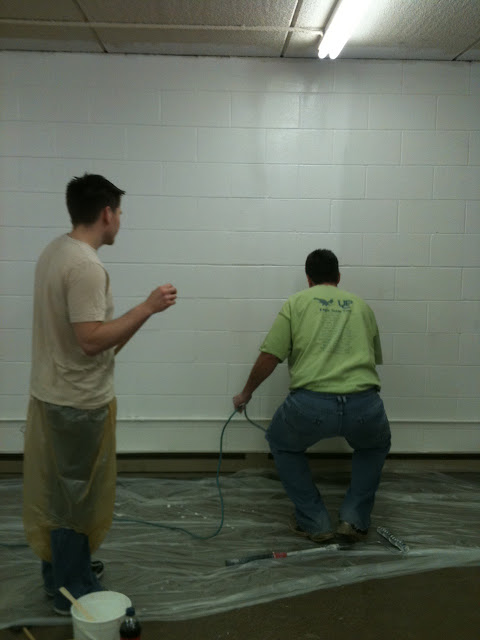 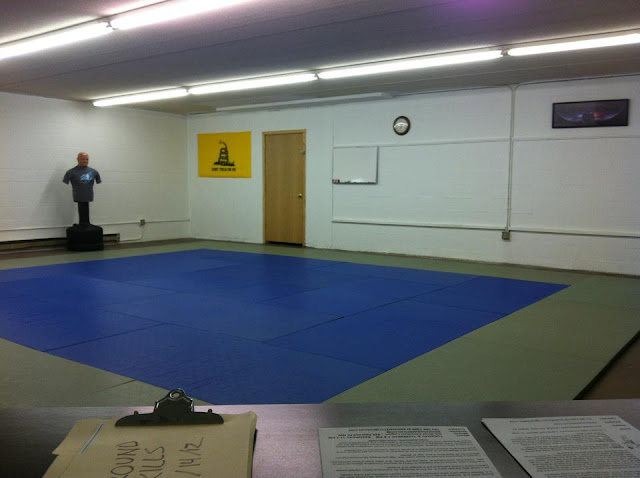 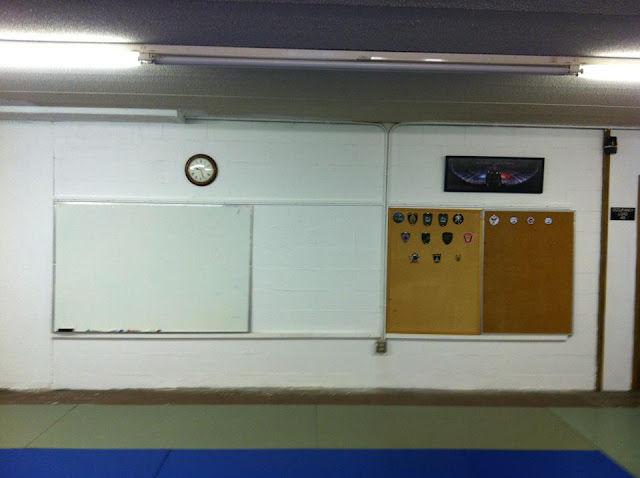 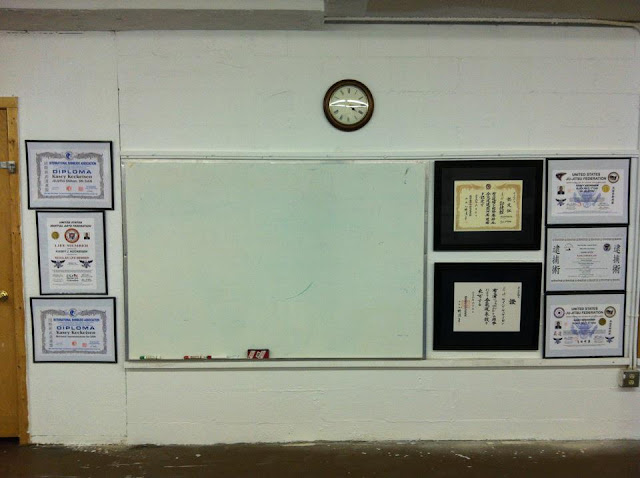 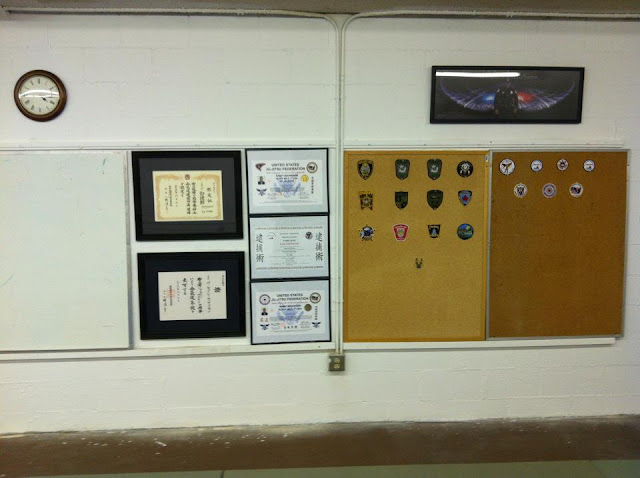 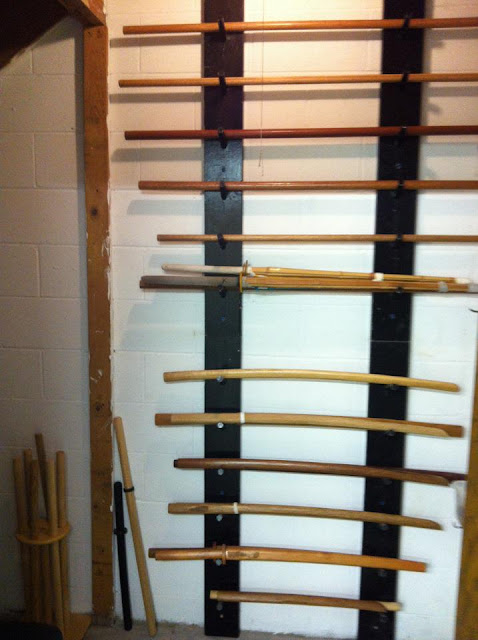 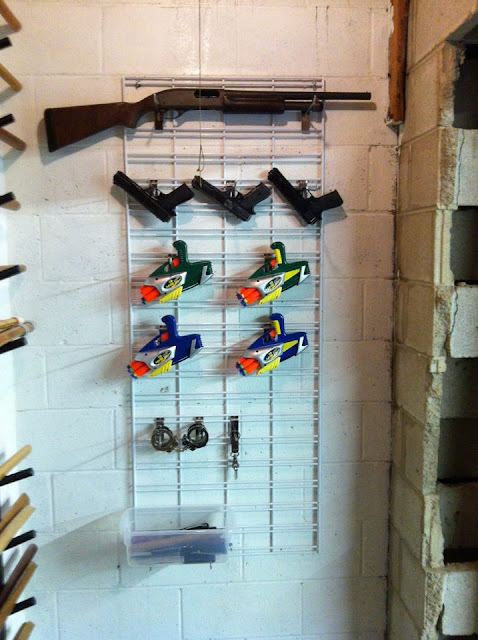 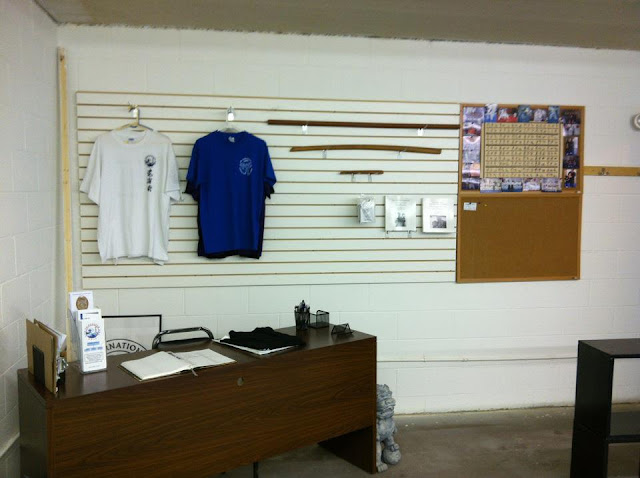 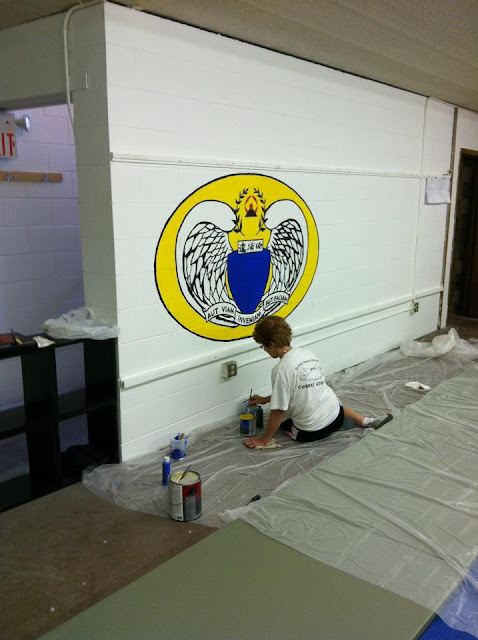 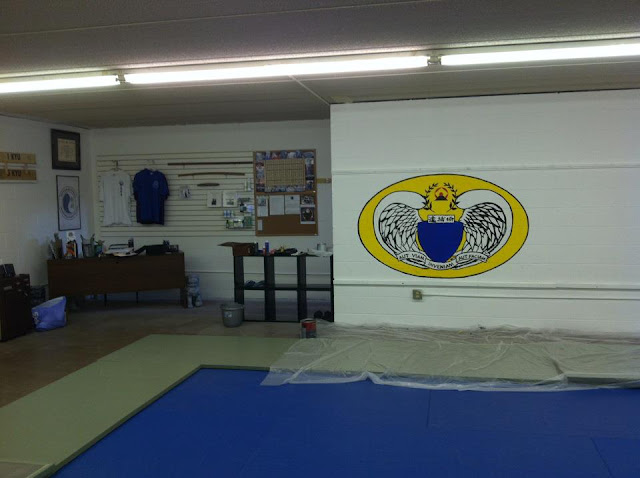 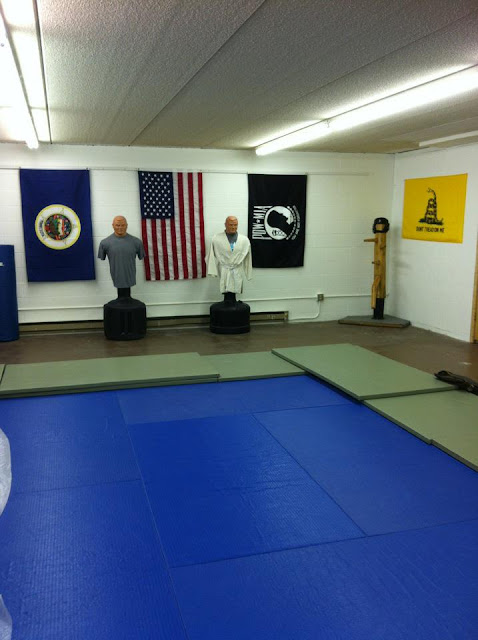 I’ll end this blog with an example of that bond 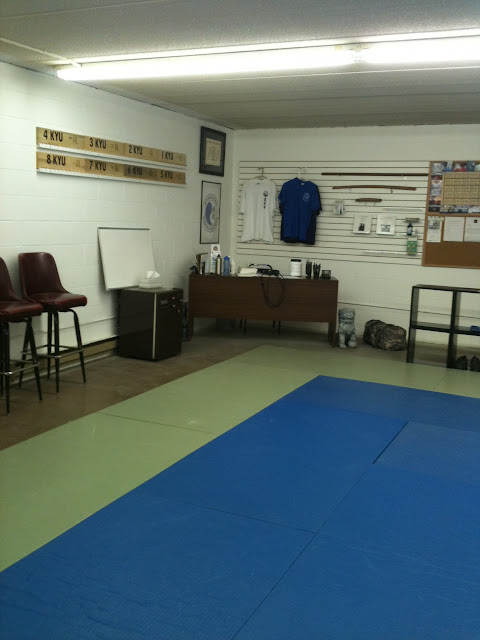 This picture is of the Dojo membership wall.  I am not overly concerned with the rank of my students.  However, I really like this rank board because you have to earn your place on it through blood and sweat.

The other reason I like this rank board and why it is an example of this bond, this particular rank board was a gift from my Sensei, Alvin McClure.  This rank board hung in his Dojo before I ever met him.  I won’t go into detail of what happened to that Dojo, but for the point of this blog it is suffice to say that the rank board was kept in storage until it had a place to hang again.

I am very proud that McClure Sensei gave it to me.  I am happy that it can be used as a visual representation of the family that the Dojo has forged

So I'll return to the original question of this blog -
Does training for practical application require a Dojo?  The world is your Dojo you can train anywhere.  But you can only get so far training by yourself.  The people you sweat and bleed on - they are the Dojo.
With that definition - hell yes practical training is dependent on a Dojo.

I am very blessed to have built mine - go build yours.

Train hard, Train Smart, Be safe - Take time to appreciate those who are willing to spend their time and effort to train with you
Posted by Kasey at 9:47 AM 8 comments:

Morihei Ueshiba (The founder of Aikido) said do not abandon the warrior arts of the past. Absorb venerable traditions of the old ways into this Art by clothing them with fresh garments, and building on the classic styles to create better forms.

The phrase has been attributed to ; when his generals told him it was impossible to cross the by elephant

I chose that motto because I searched for a way for a long time but nothing fit my needs so I made my own way.

Recently I have found that same philosophy can be used for for lots of things.  Don't let anyone tell you it can't be done.

So what inspired this blog?

The equipment I use for this training is the by Body Weight Culture.  I have had great success with this product.  However, I have also cracked two of the handles.  There is really no good way to repair the handles that I have found.  At least not a good way to repair them to be able to handle my body weight at the intensity I like training at, and Body Weight Culture no longer sells this product.

So again I am faced with finding a way or making a way.  Suspension training works best for me, so I decided to make my own suspension body weight strength training apparatus.

I call it the Gorilla Ladder 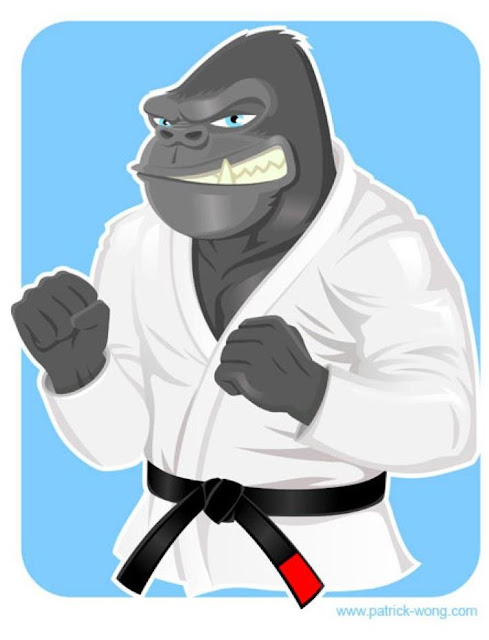 How to build:
Here is a link to show you how to tie knots
http://www.animatedknots.com/indexbasics.php 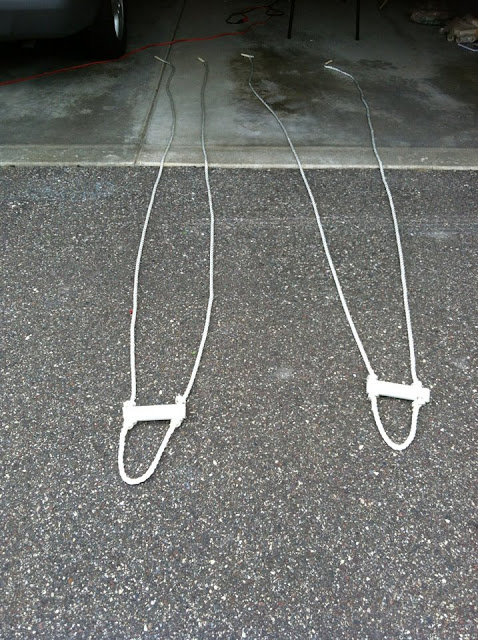 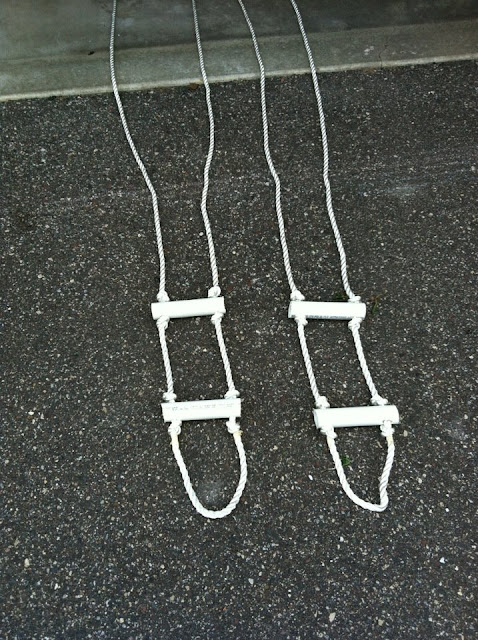 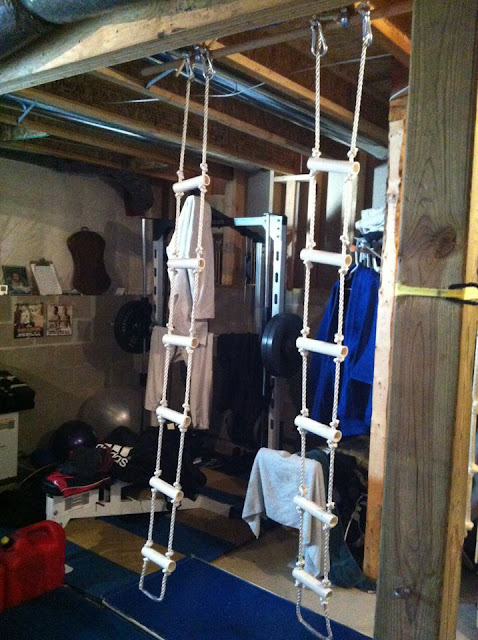 I did a test run working out with it today.  It worked great.  It met my specific needs because I built it for me.  Case in point the handles are 6” apart.  It is tough for me to fit me feet into that when I’m wearing shoes.  With a 9” space that was easy and I didn’t waste time flopping on the ground trying to get my feet in and out so I kept my heart rate up.  When I needed the handles to be closer together I just looped them through shrinking the gap to about 6” just like the . 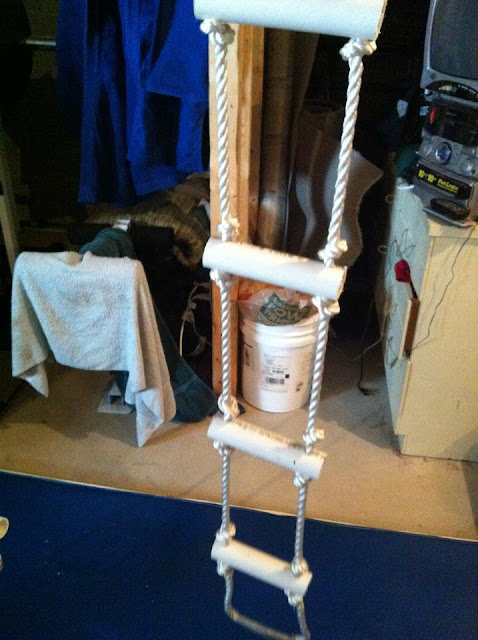 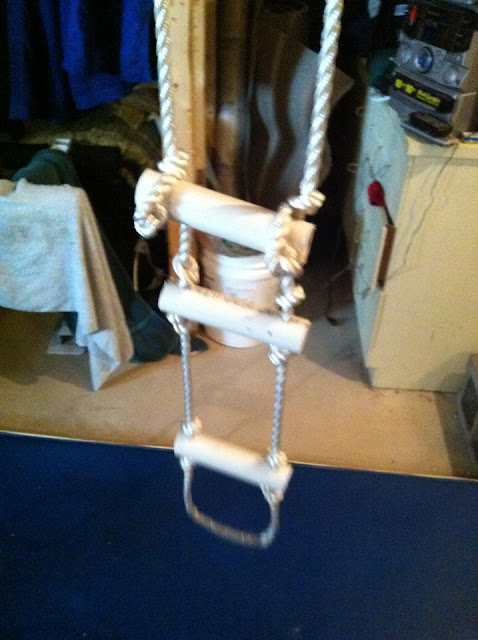 So no one knows you like you know you.  You are your own best teacher.  Go make your own way.  Build something better.

If you want to try out Suspension Body Weight Training follow that plan and make your own gear.  If you have more money than time and you want me to build you one let me know in the comments bellow.  I figure $60 plus shipping is a fair price