Then my back decided it was going to go into spasm for a couple of days, and I couldn't do much thinking besides ouch my back hurts.

So after nearly 80 hours of training I am still decompressing and churning through all of that information.

As it usually happens the training was great, but the conversations over scotch and cigars is where a lot of brain sweat happens.

I have been mulling over one of those discussions.   I thought it might be useful to share, and writing about it will help me think it out.

The conversation was between two guys with tactical team and traditional Japanese Budo training backgrounds.  So things might get a little "inside baseball" meaning it is only relevant to tactical guys with Budo backgrounds.  However, I think the lessons learned are relevant for anyone who reads this blog.

The name of the blog is Practical Budo if I can't make that relevant on this blog I better switch to writing about comic books
Most of the Ryu –ha (different martial arts schools) developed after the warring states era. 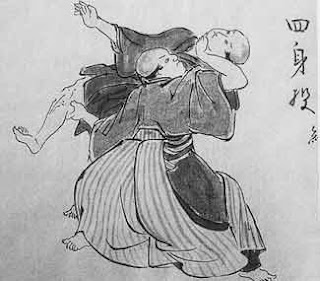 The Sengoku period or Warring States period in Japanese history was a time of nearly constant military conflict that lasted roughly from the middle of the 15th century to the beginning of the 17th century. The Sengoku period in would eventually lead to the unification of political power under the Tokugawa shogunate.

The thought provoking question is:


Did these schools develop to maintain martial skills?  To keep these skills in reserve for when the next war inevitably broke out?

Did these schools develop to put a leash on 1000’s of young men trained to kill?  Focusing on chivalry and bushido to de-fang them so they could better reintegrate into society?

How many other warrior casts / societies in the world practiced writing poetry, flower arranging, and making tea?

At the seminar we discussed a comfort with violence scale:


Roughly the scale works like this, The level of violence you are comfortable with works on all levels below you.  You don’t like people willing to go one level higher, and although you need them, people 2 levels or higher make you uncomfortable (may seem like monsters to you).

For example, Operators by definition have to start at assaultive and be able to bump up to lethal on demand (sociopath on demand is a concept worthy of an entire blog to its self).  So as an Operator if your wife who is nice is having problems with her boss who is manipulative, to you it seems a natural solution for her to just stand up to him (be assertive).  However, that is a 2 level leap which is very difficult for people to do.  It is easy for higher levels to use the tactics of lower levels.  That’s probably why you are still married to your nice wife, assaultive and be able to bump up to lethal on demand can use the mechanisms of any level below that including those of the nice (sociopath on demand).  But it is very hard for someone comfortable being nice to even manipulate.

For more information on this check out "Violence: A Writer's Guide"
http://www.amazon.com/Violence-A-Writers-Guide-ebook/dp/B004EYTBNA

So Tokugowa brings unification and all these men more than willing to kill, many battle hardened veterans are returning to a life of relative peace. 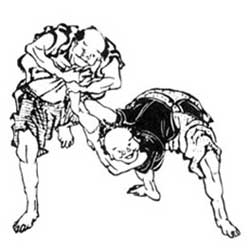 Most of the people they are returning to see them as monsters.  Monsters they needed, and may need again, but monsters all the same.

Was the romanticized / idealized version of bushido an attempt to control the monsters?

If so how much of the training passed on from this era is about efficiently killing an enemy, and how much of it is training habits specifically designed to keep young men on a leash until needed?  And if so what training methods to remove that leash have been lost?  How many generations until only the leash is left?

How do you train young men to kill efficiently, with out creating monsters?  How long would it take?

Look at the example of WWII combatives.  Take a bunch of strapping young farm boys that know how to hunt and camp in the wild and give them a crash course on how to kill.  A couple of weeks on how to kill with fire arms, edged weapons, and their bare hands.  That training method created some of the most bad ass Operators in military history.  Took nice people and made them comfortable with killing.  When the war ended very few if any continued training or passed on what they knew to others.  Because there was no need.   By the time rolled around most of this training was lost.

How do you balance passing on an entire art with training individuals to be as efficient fighters as they can be?

Can you do both at the same time?

Won’t individuals need some sort of baseline art to start with?  WWII combatives are really just nasty applications of Jujutsu.  Could there have a Devil’s Brigade with out a Jujutsu baseline?  Would there have been a Jujutsu to use as a baseline if it wasn’t passed down from generation to generation?

I don’t think you can pass on a tradition, an “art” and train effective individuals using the same methods at the same time.

By definition to pass on an art your students have to do something exactly the same way as you did.  Even if that makes no sense for the student. (Not efficient)

The phrase I heard that best describes this is  "failed clones of the teacher".

A student can spend several ars learning your art, and then several more refining that art in a manner that works for them.  This is how many Ryu-ha split from each other.  For all intents and purposes this is the process that I went through. (And many other Operators who are now in teaching roles).

How can this been done in a more time efficient manner?

Rory Miller is they guy that sparked this thought process in my head.  He comes from a corrections back ground.  So lets use corrections terms to find a solution.

For the sake of discussion lets estimate it takes 5 ars to obtain a level of competency in an art, say black belt level.  Lets’ also estimate that it takes another 5 ars to make that art work specifically for you.  To develop your personal method – Effective individual.

However, If you can refine your personal method the entire time you are learning an art.  If you learn what makes an art (any art) work for the teacher instead of imitating the teacher you get

This is what I have been striving to achieve.  Training methods I've been working informally with Lise have provided dramatic results as I’ve mentioned in previous blogs.  Those informal training sessions we’re not purely philanthropic.  Those sessions have also made me a better Operator, and Instructor.

You can see a variation of this theme in sport application of arts.  A competitive Judoka doesn't learn every throw in the Gokyo no nage waza (the original 40 throws of Judo broken into 5 groups of 8).  Of those 40 throws they are exposed to the throws shown most likely to work in competition.  Of those, they focus on 2 or 3 that work best for them.  If these competitive Judoka want to go on to teach they will learn the rest of the Gokyo no nage waza as the age out of their competitive years.

Very good Judo schools offer training that appeals to people who want to learn all of Judo, and those who want to focus specifically on the part of Judo that works best for them.

Judo / Jujutsu is the base.  Specific applications of that base, can be tailored to fit those needs of individual students.

So from all this thought provocation how do I make this relevant to others.

This next part is specific to my Dojo but take what works for you and go with it.

Sunday has always been informal combat conditioning or Sunday Funday.
Lise has been the only student that has shown up on Sundays on a regular basis.

I feel if I develop this class further with the emphasis on teaching individuals how to apply basic principles under pressure, and with the majority of the class time devoted to “free play”, that I will take great strides in helping to develop efficient individual Operators.

Taiho Jutsu Classes (Kasey's Cop Judo / Jujutsu) is the base.  Specific applications of that base, can be tailored to fit those needs of individual students.

Another thing I plan on implementing on Sundays is "Fight Club".
[Your first night at fight club you have to fight]

During the Logic of Violence class we spent a lot of time learning how criminals operate, and which victim profiles we fit.

Fight Club would basically be scenario training specifically tailored to the needs of one student.
To earn a training day devoted to you, you have to be a role player in 3 other student's scenarios.

The scenarios will address the victim profiles the student fits and simulate where and how a criminal looking for that profile would operate.

So the student gets individualized training to deal with the types of violence they are most likely to face.

The role players get field application of the academic concepts covered in the violence dynamics seminar, and by logically role playing a criminal, the role players learn what criminals need to operate and inversely how to prevent them from achieving their goals.

Also by applying to have a scenario day dedicated to you, the student must go through the logic of violence process and discover which victim profiles they fit and where they are most at risk.